I know, I know, I promised this post AGES ago, but I’ve been lazy. (see how I didn’t hide there?)

You can look at all the photos in a separate photo album here.

First View – Walking in from the Front Door 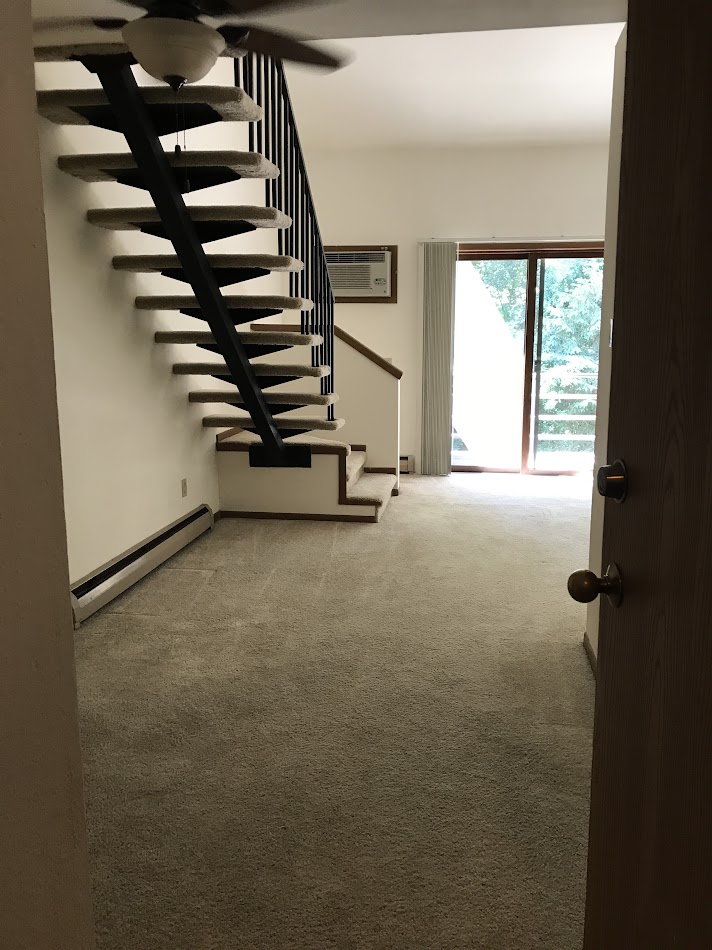 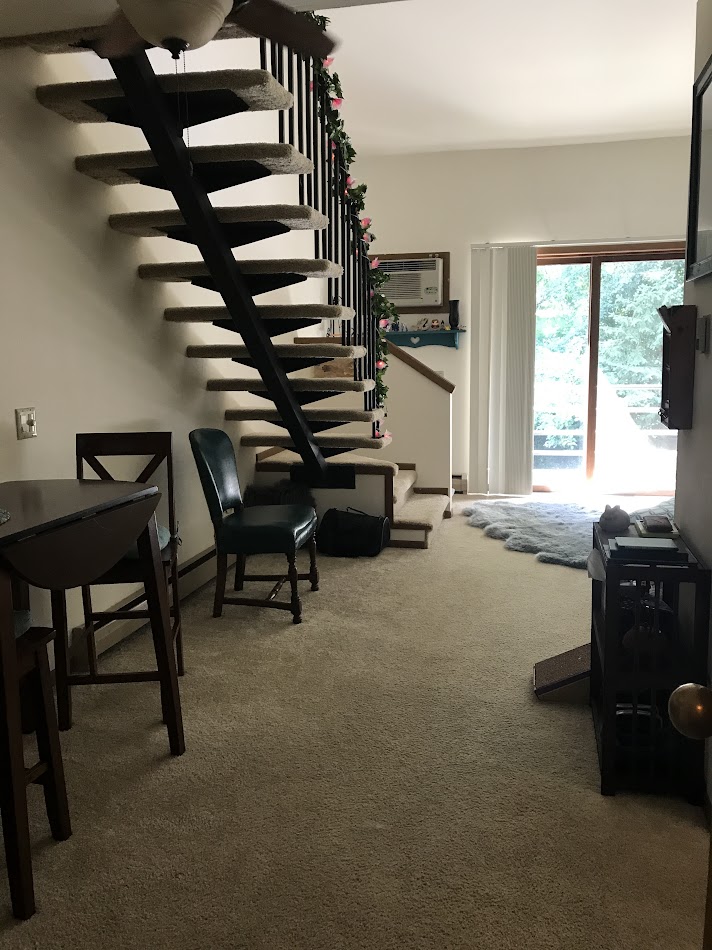 A nice before-and-after setup that I can’t promise to continue. /wink

I don’t want to go into great detail here, because everything is easier to see in upcoming pictures. First, let’s look at the kitchen. 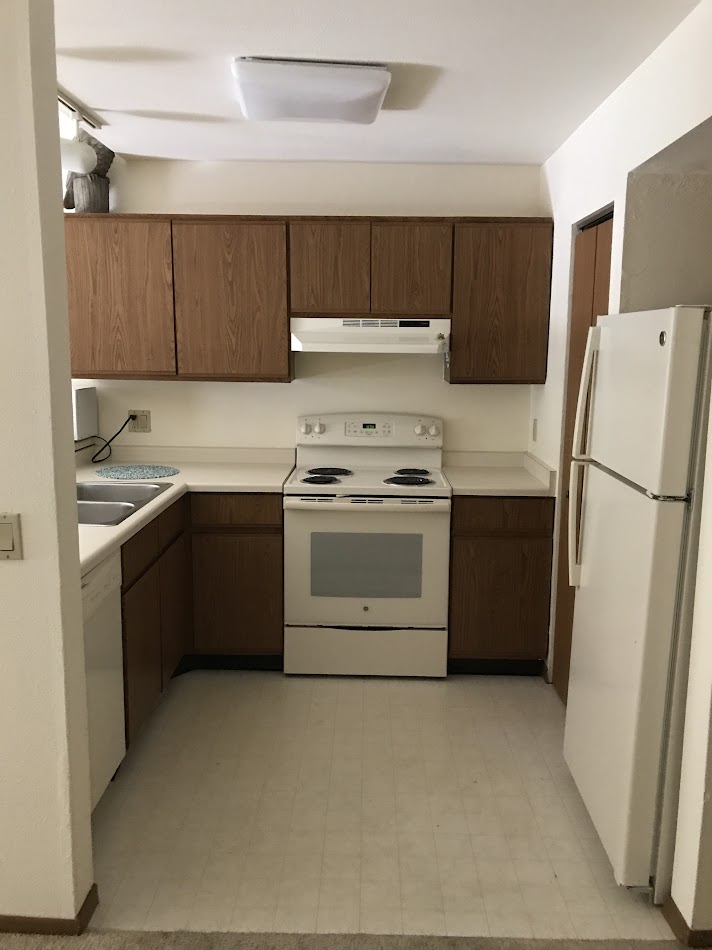 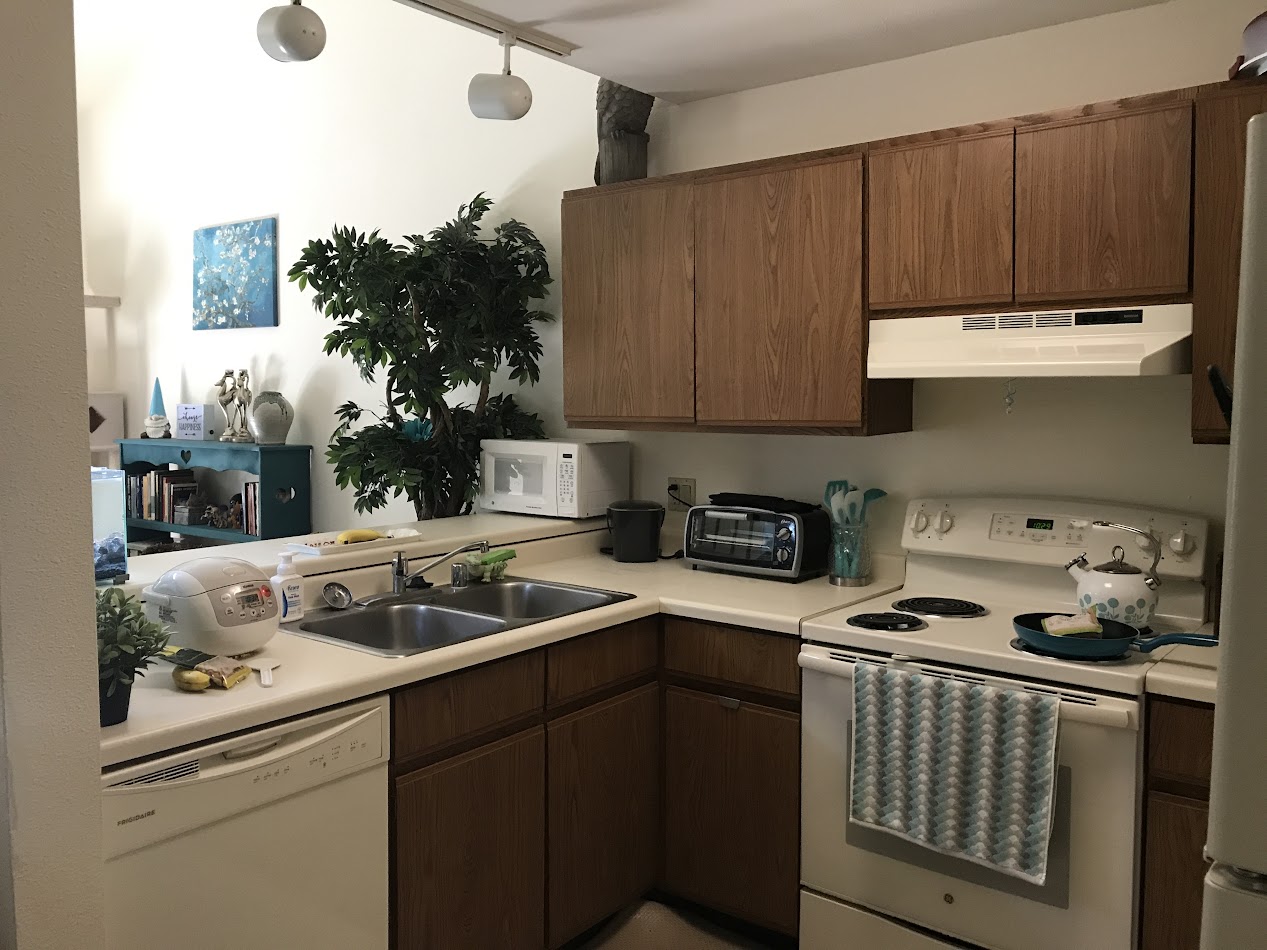 Slightly different angle on the after picture, but that’s okay. You can see my mint-to-turquoise theme pretty strongly here. (You can also see that I’m thawing some turkey and my rice cooker is making my oatmeal for breakfast, but we’ll ignore that for now.)

Notice instead the happy teakettle, the turquoise frying pan, the super cool shell-patterned hand towel, the teal spatula assortment (in an owl-shaped glass jar, for the sharp-eyed), the hilarious crocodile guarding my sink sponge, and the spritely tree inviting you to look into the living room, which we’ll see in more detail in just a moment.

That rice cooker, by the way? MAGICAL. I splurged and bought a slightly expensive (but still small enough for one person) rice cooker. It features fuzzy logic cooking AND it sings to me when it’s done.

I may or may not have decided to splurge more based on the singing than the fuzzy logic, though I do appreciate that it also cooks things like beans and oatmeal.

The Dining Room (aka, the little bit of area beneath the stairs). 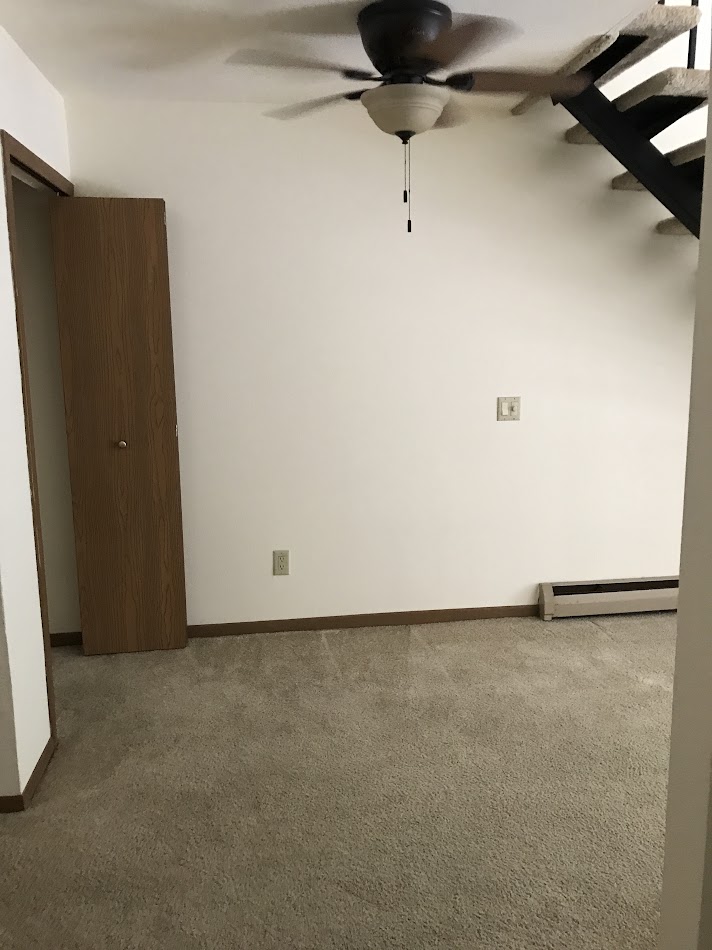 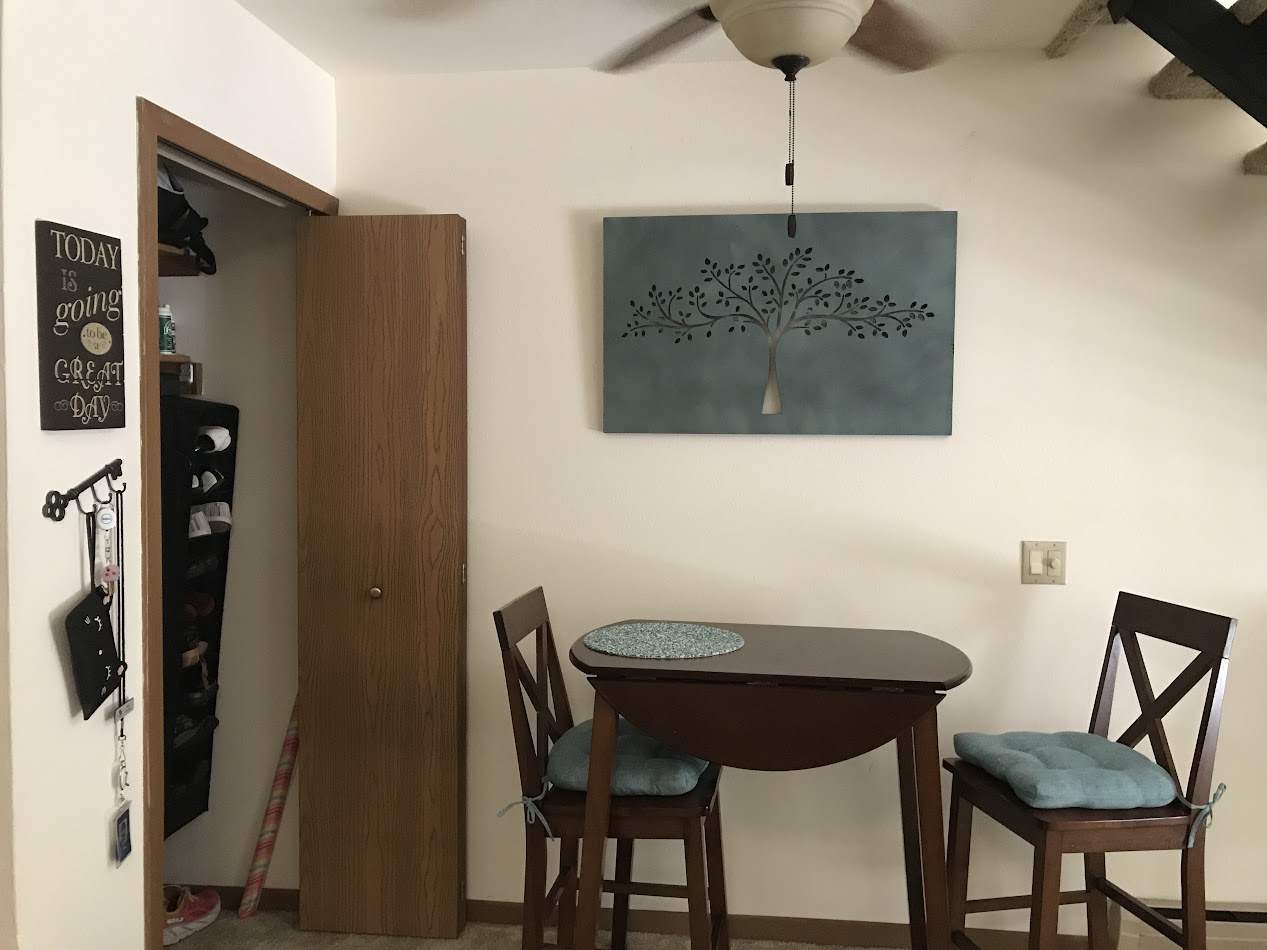 Hooray, a table! Let’s pretend for a moment that I actually eat on this thing instead of just hanging out on the balcony with Tiny and eating off my lap like a savage, shall we?

This cute little two-seater used to be our table many moons ago, and my mom used it for a long while after we upgraded. She wasn’t using it any more, and it’s just perfect for this little nook of a Dining Room. The old red pads moved upstairs (you’ll see those in a minute) and I replaced the downstairs ones with some powdery-teal ones that match better. Tree picture over the table to symbolize family and life (or maybe just to be pretty, who are you to judge?)

Hanging shoe organizer is AWESOME and strongly recommended. I got this one from Ikea.

You’ll also see my key/badge/clutch hanger there on the wall — if I panned more to the left, you’d see the front door there. Very handy. 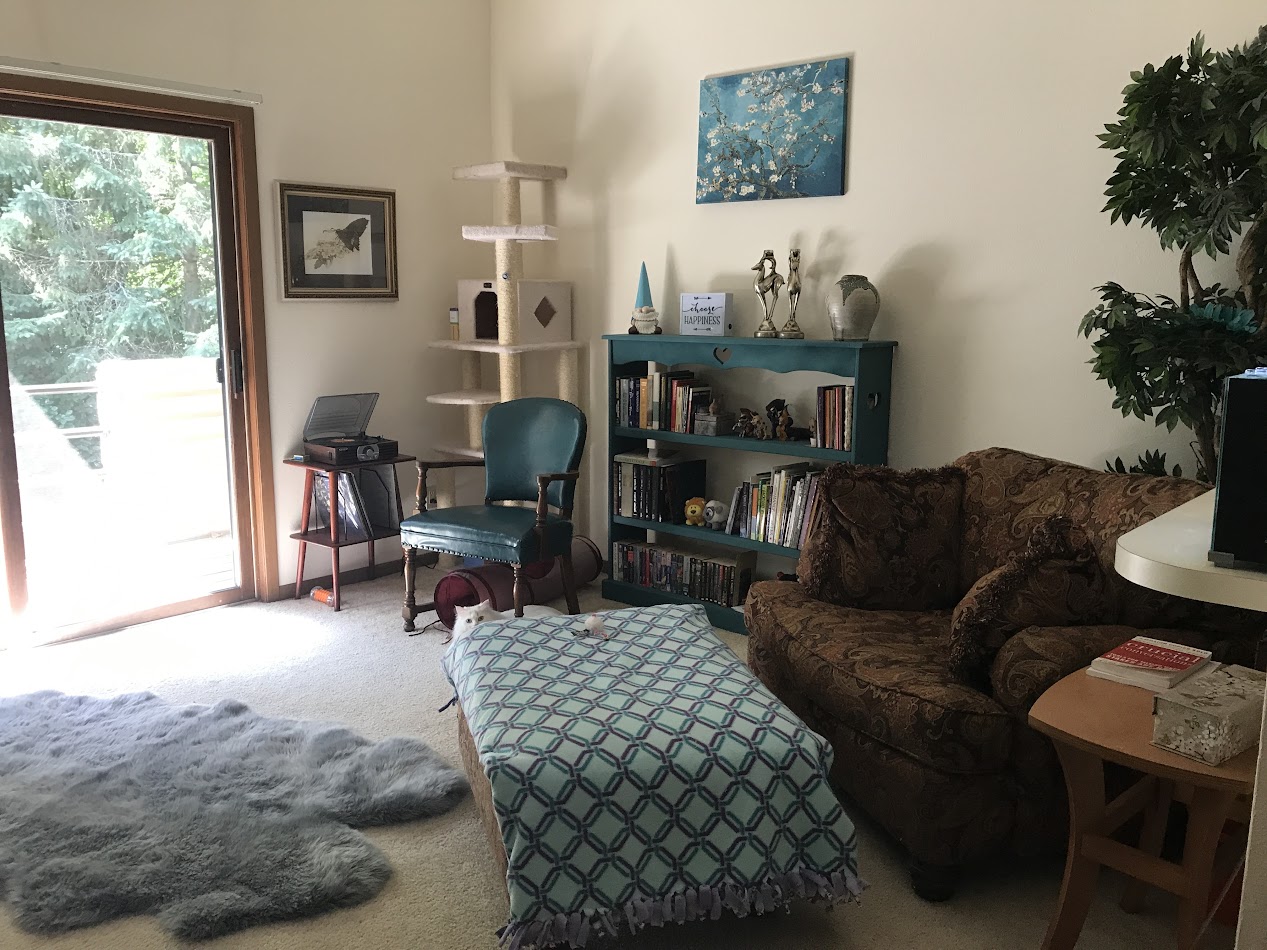 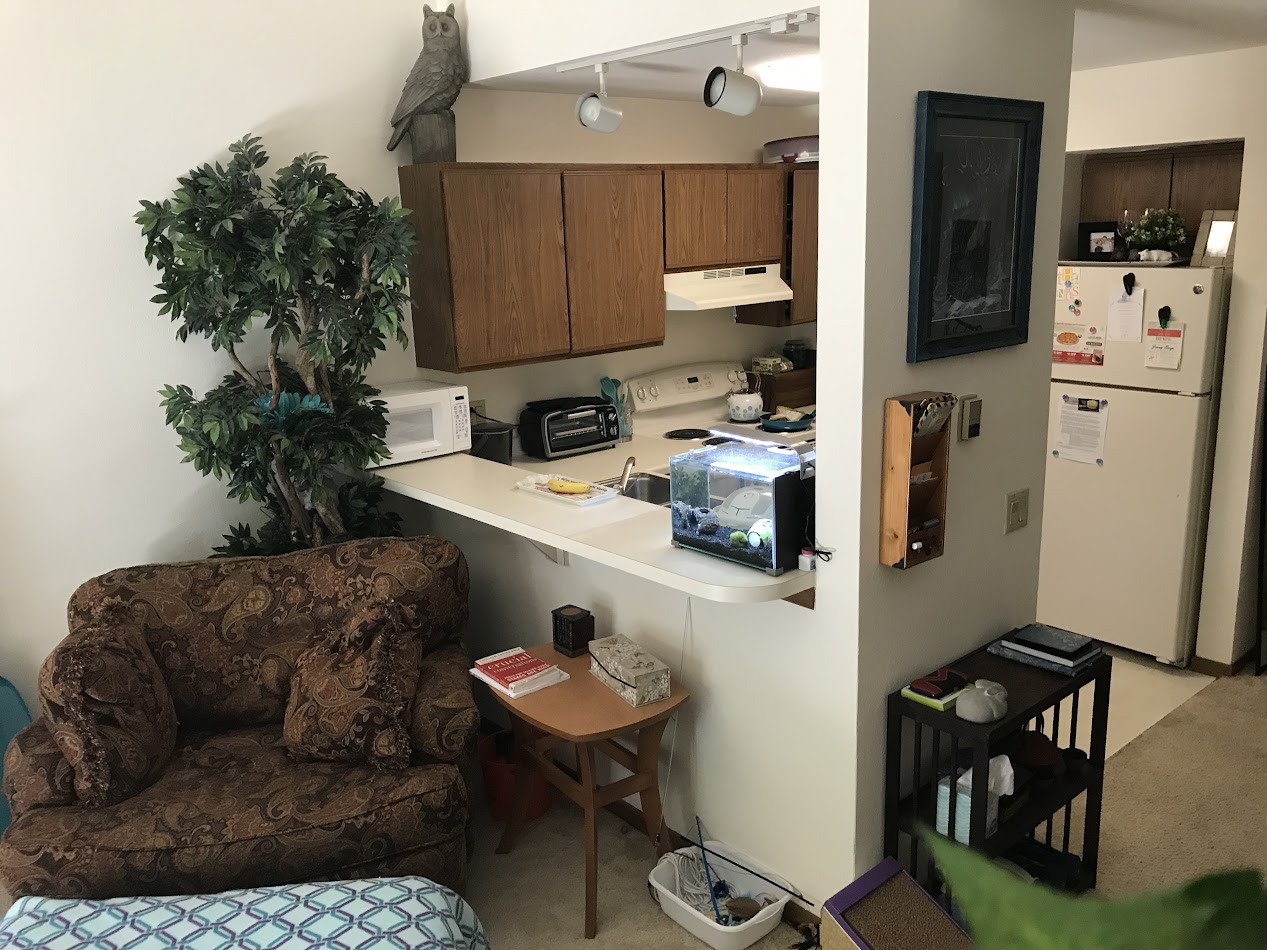 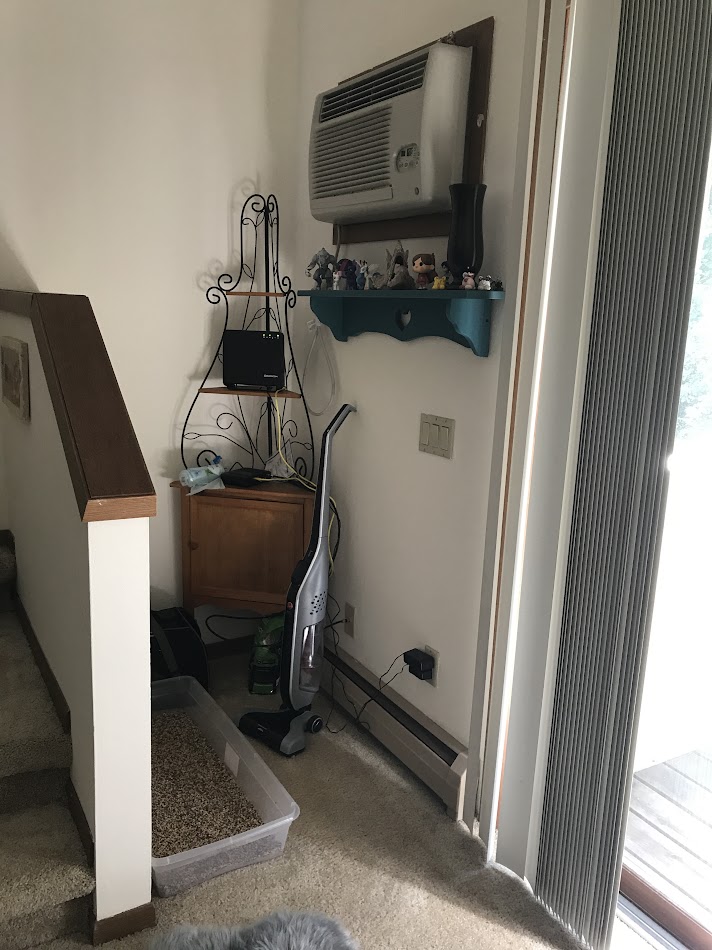 I had a before picture of the living room, but it was just an empty carpeted square, so I didn’t waste time posting it.

The after pics are where it’s at.

I’ll start in the middle, because why the hell not. =]

That bookcase used to be a boring old brown. My mom bought it for me when I was still in high school, and I’ve had it with me ever since.

It got painted blue before I moved here, and I absolutely love everything about it. So many good memories in that shelf. (Y’all are all book lovers, I’m sure you understand.)

It’s holding what remains of my book collection (which will continue to dwindle as I read/reread and thin out the herd). It’s also got a few knickknacks and whooziwhatsits on it, including a hand-painted custom Harold nerf gun from a certain Canadian we know and love.

To the right of that, we see the soul-hugging chair — still huge, still paisley, and still romancing everyone who sits in it. The blanket on the ottoman is a hand-made gift from my niece and mom and it is SO WARM.

Tiny side table to the right of that holding books to be read and a box to hold bookmarks and hide stray ponytail holders from a certain mischievous kitten.

You’ll see said kitten ignoring the giant cat tree in the corner in favor of peering creepily at me over the edge of the ottoman.

Just behind him is one of the two random turquoise leather chairs found at Habitat for Humanity. Too inexpensive and perfect not to pick up, and they add both seating and some semblance of propriety to what is otherwise mostly a room filled with toys. =]

Above the bookshelf is my keystone piece — a cheap print of Van Gogh’s Almond Blossom painting. It validates and deepens all the teals and blues I’m using, and I love it so much that it’s also the cover for my iPad and Kindle.

On the wall just next to the balcony door, there’s a little record player on a stand. It makes me happy, even though my collection is woefully tiny at the moment. My favorite record is “What if Mozart Wrote Have Yourself a Merry Little Christmas” and I’m also the proud owner of the sountrack for Westworld (in a really creepy-cool “milk white” edition color). Yes, it is exactly as awesome as you think it is.

Steampunk butterfly print on the wall is from Ursula Vernon, and yes it is why there’s a mechanical moth in Choose.

The room also has this weird nook just at the base of the stairs. I’ve got my internet-making-machines there (because I have no choice) as well as the litterbox and tiny vacuum. (that machine is AWESOME. I got it from Costco on sale and it runs on BATTERIES. No cables.)

Before we leave the living room, let’s turn back and take a peek towards the kitchen, where you’ll see Sir Reginald Von Bartlesby’s fish tank. Smaller than he’s used to, but plenty big enough for a single betta. Plus, he’s got three different hidey-holes, and he loves them all. Still sasses at me in the morning when he knows it’s time for him to be fed, and he follows me through the kitchen when I’m cooking. =]

Also, badass owl hanging out on top of the cupboards is still one of my favorite owls. (There’s also a neat cement planter owl out on the balcony, but it was too sunny to show up on the pics. Heavy as a beast, but very very cool) 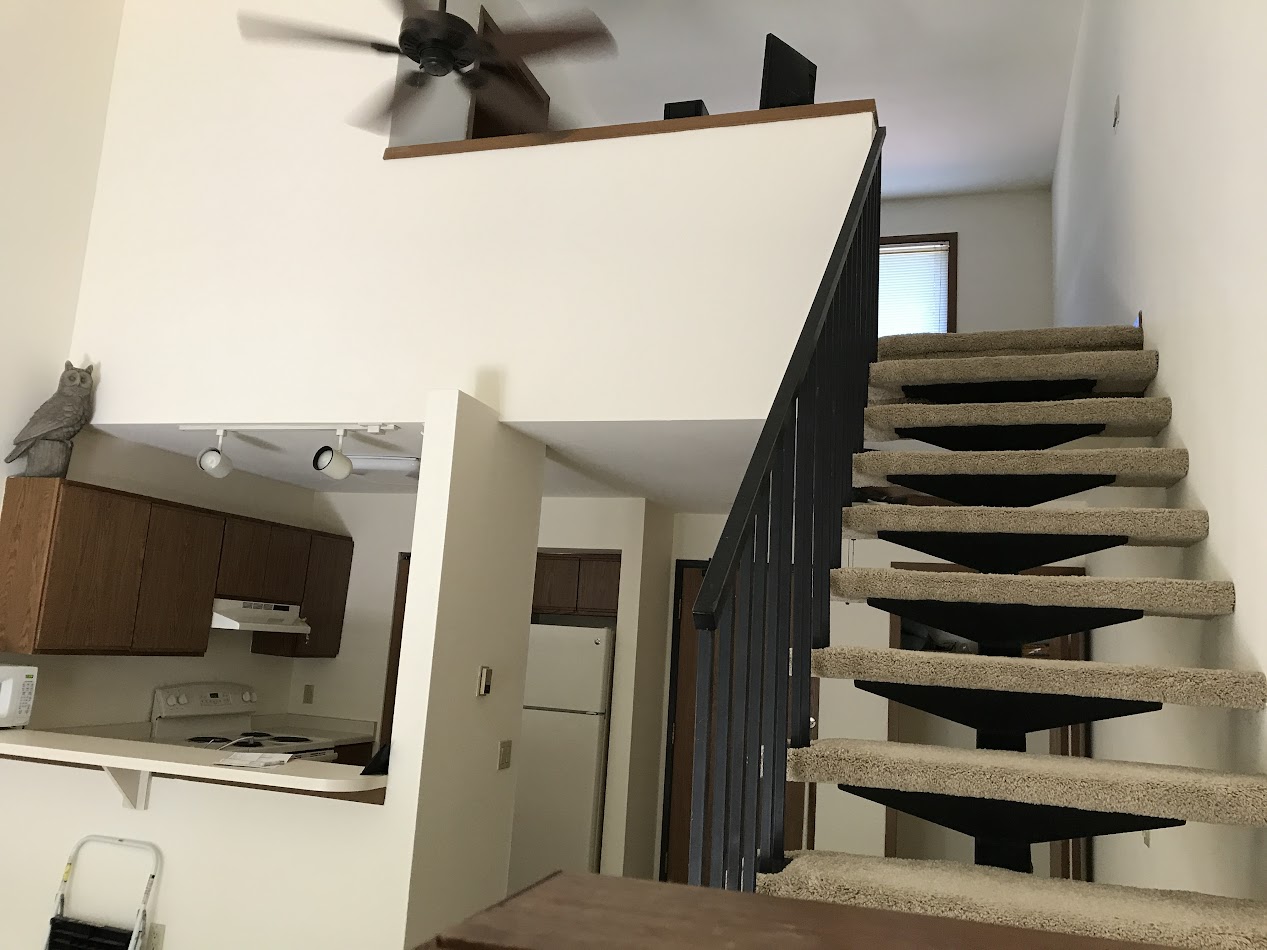 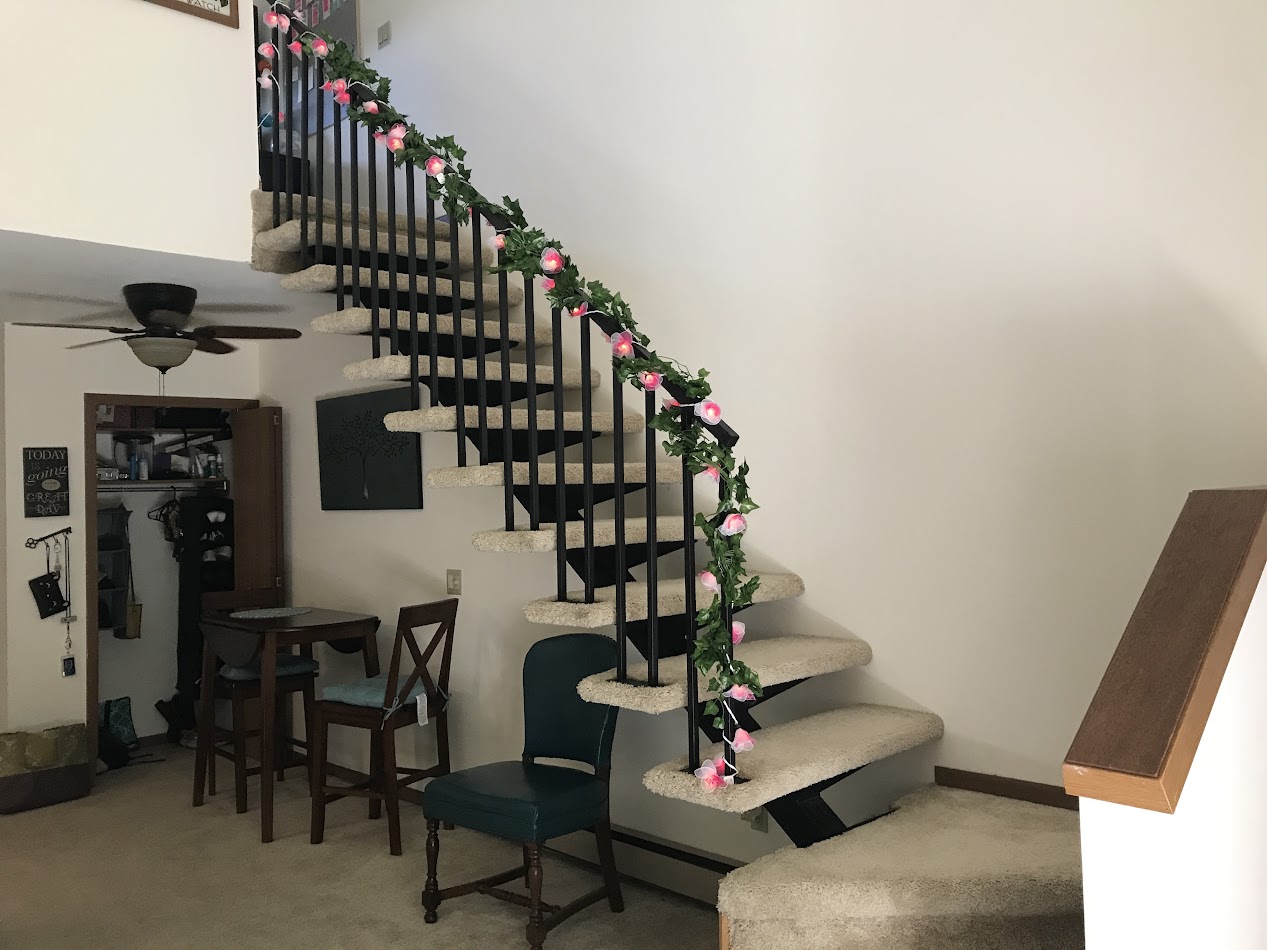 One before picture (the owl was the first thing I moved, so he shouldn’t technically be in that picture, but he’s such a ham).

The main point of these pics is to show you the flowers and ivy a little better … but also to show you the second leather chair waiting in the wings for someone to need him. <3 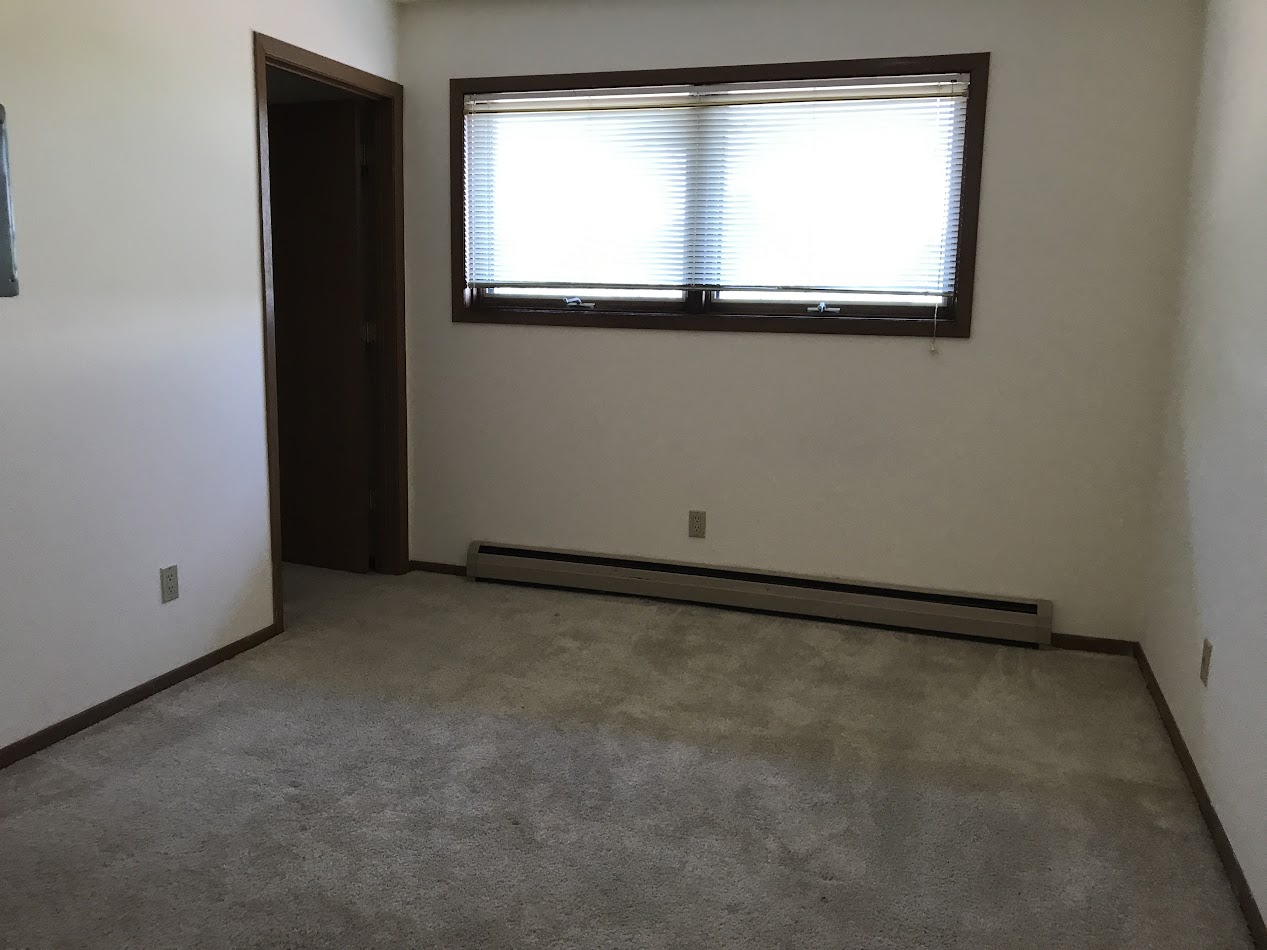 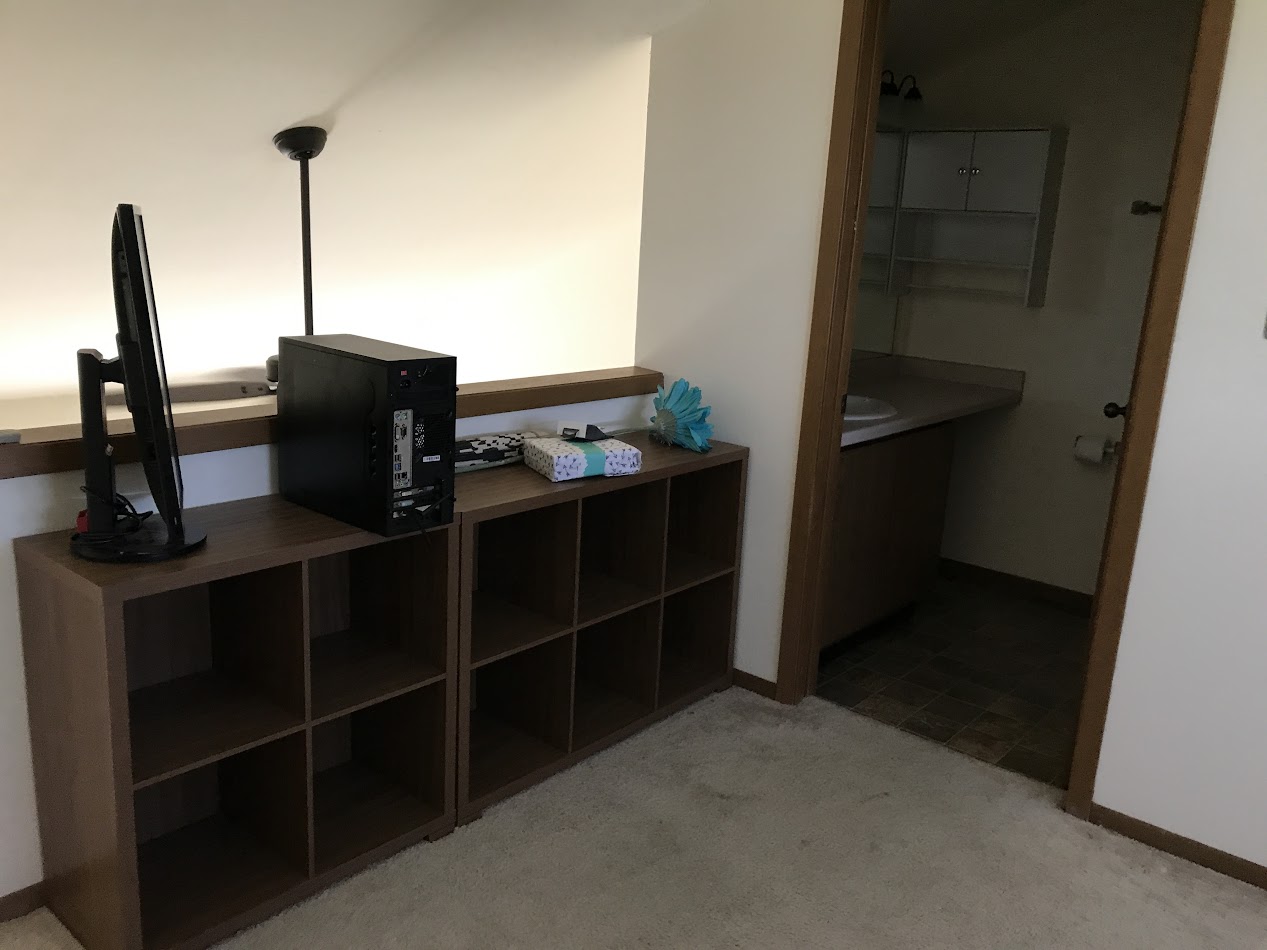 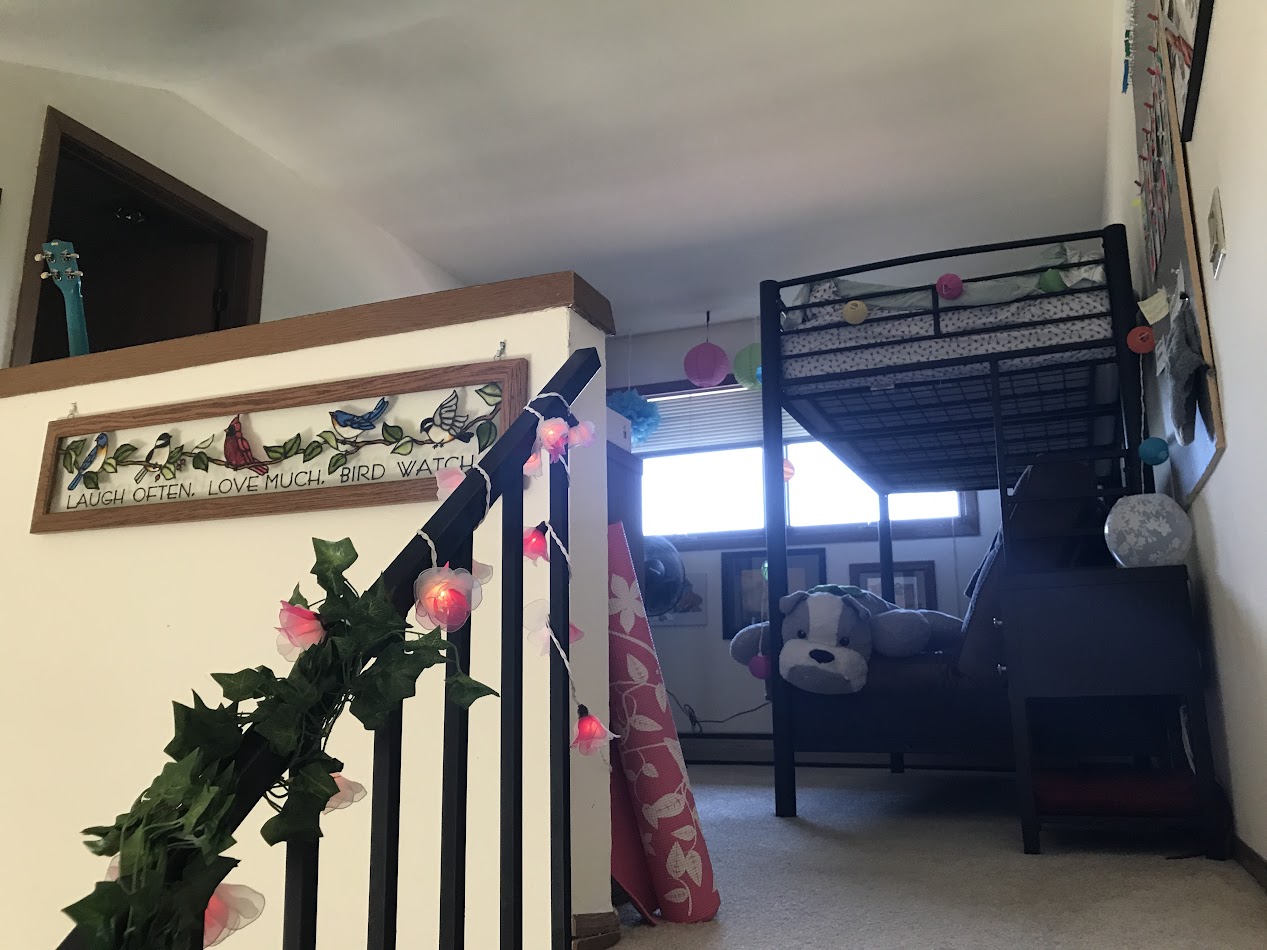 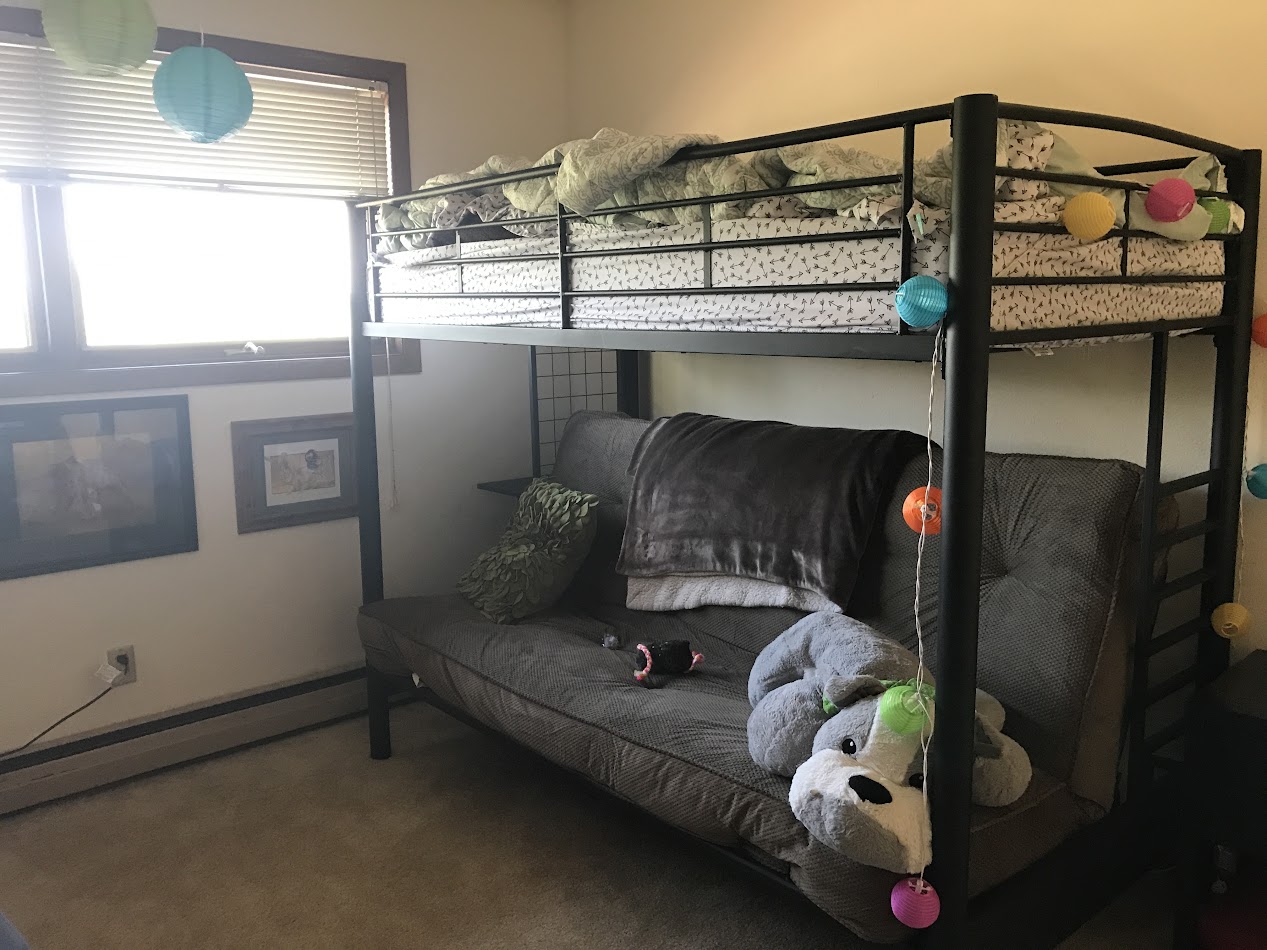 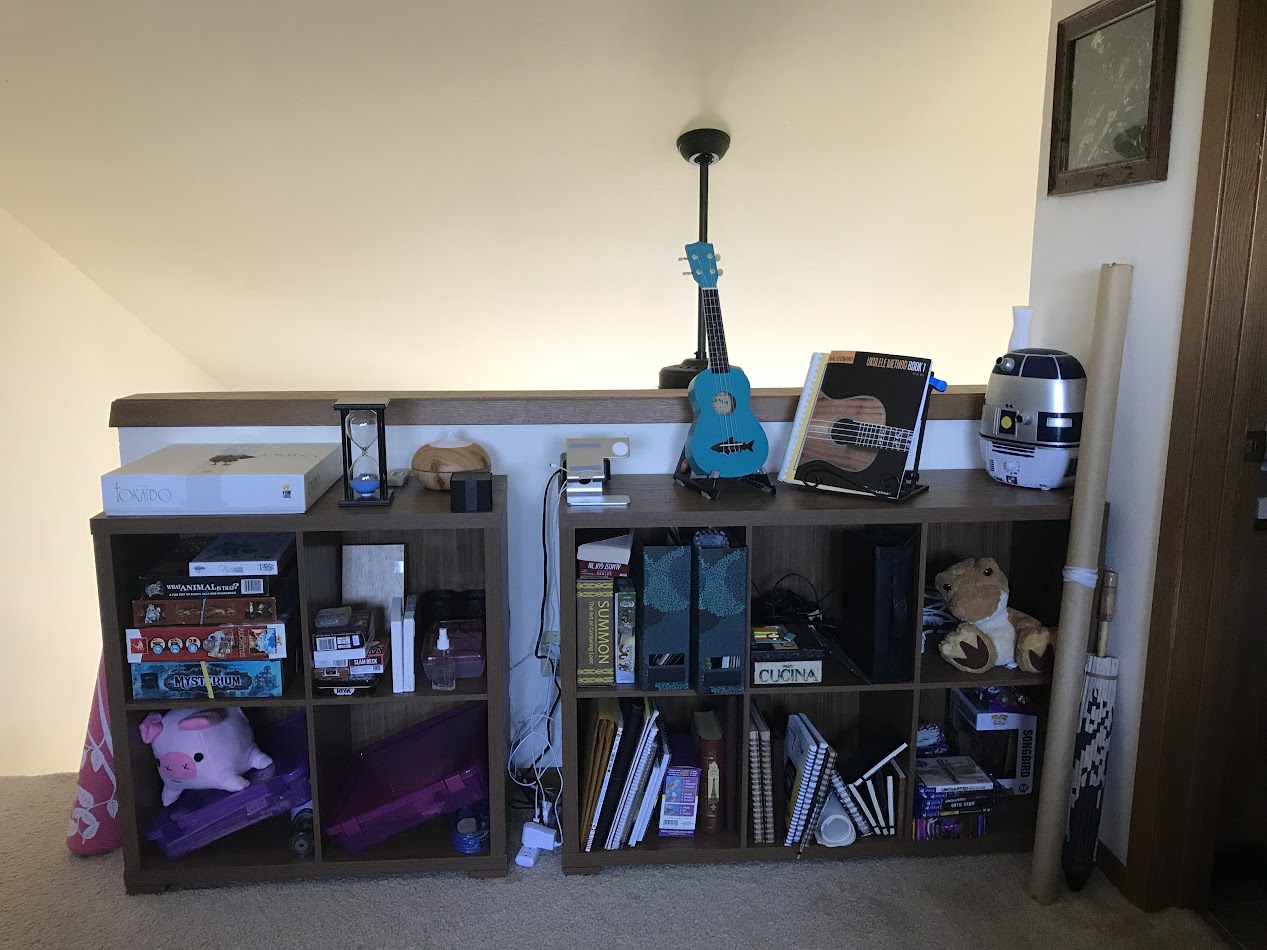 The previous tenant left those shelving units for me and you bet your boots I said yes when they asked if I wanted them.

Here’s where you can see that I invested in a loft bed (I super duper love it, but making the bed is an exercise in frustration, so you’ll have to excuse the nonsense on that upper bunk. In my defense, the blanket is a queen and the bed is a twin, and if you think that’s silly, you clearly don’t toss and turn as much as I do at night. I have ALL THE BLANKET.)

The bottom half of the bunk is a full-size futon. I toyed with the idea of having it be a desk instead, but this worked out better (and was actually available to purchase from Big Lots instead of buying something sight unseen or HUGE). Now I have a comfy “tv” watching station and a place for a guest to stay the night. You may be asking yourself why anyone would choose the bottom bunk when they could have the soul-hugging chair, but it’s already been used once when mom, niece, and nephew all stayed the night. So there.

And yes, that stuffed dog is exactly as soft and comfy as he looks. His name is Rufus T. Justice and he’s the law in these parts. When he says “cuddle,” you say “yes, sir” and you will like it.

Those shelves are filled with tons of barely-organized art supplies and hobby stuff. And games. And random stuffed animals.

I’m looking forward to the ukulele classes that start this week!

Also, see that sand timer? That’s not just for show. It’s a 45 minute sand timer and when I sit down to write, I flip that guy over. I cannot stop writing until it is done. I can whine and stomp and mope and flail, but until the last grain of sand is gone, I am not allowed to do anything that isn’t directly related to writing.

She’s a hard taskmistress, but she is fair.

The Office aka The Walls in the Bedroom 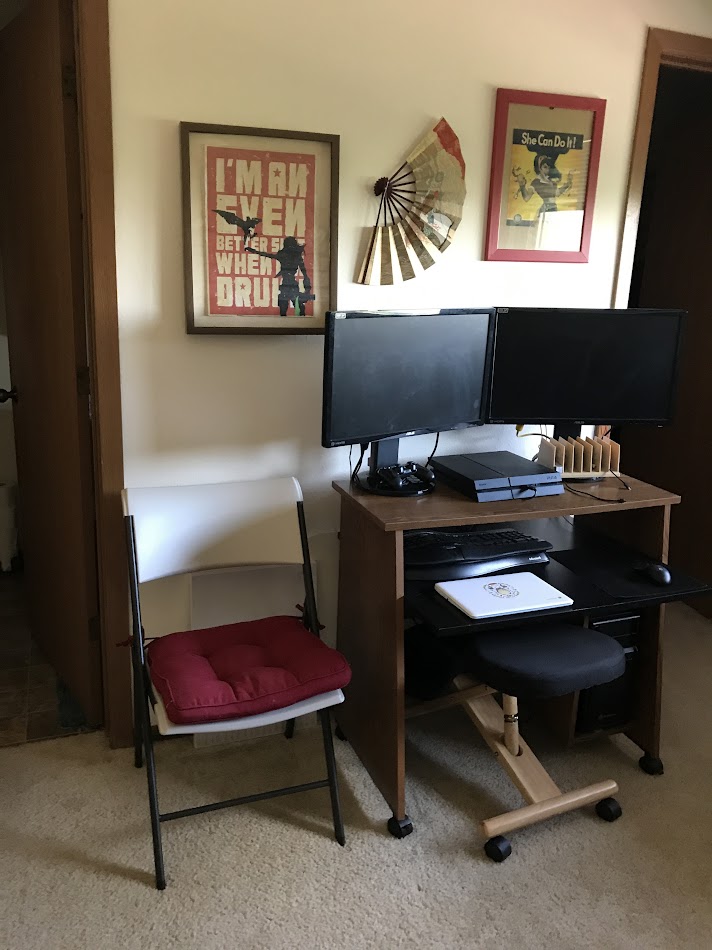 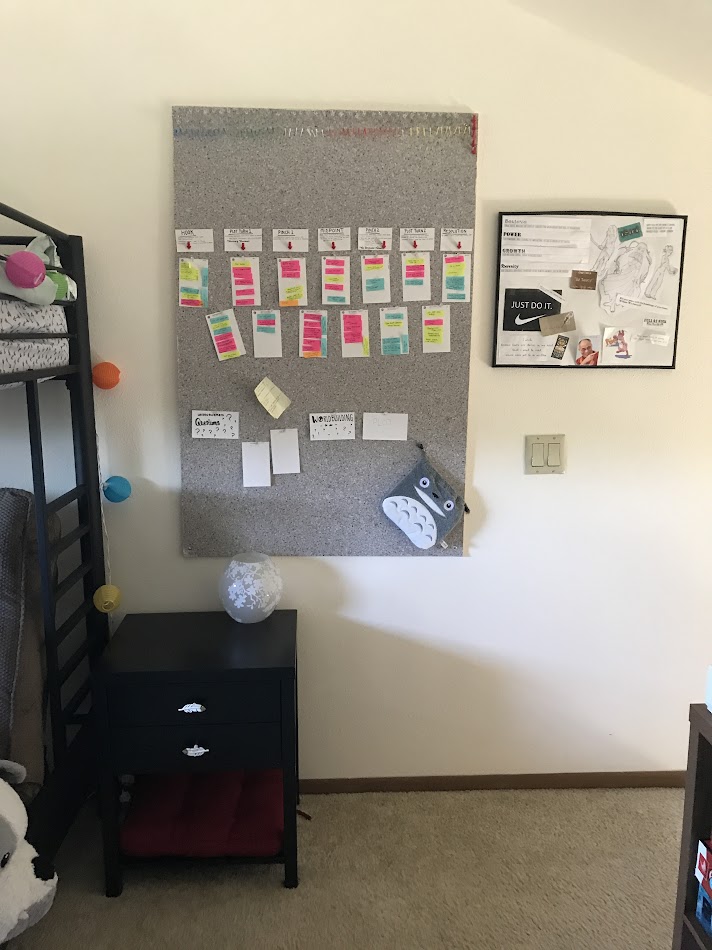 I felt like separating the “office” from the bedroom in photos, even though it’s all the same room.

Two monitors hooked up both to my computer and my PS4 means I have many options when it comes to entertainment here. (and the futon opposite it means I can play the PS4 comfortably)

The white chair is there because it’s light, portable, and seven billion times more comfortable for long-term typing than my fun little ergonomic fellow. Also, he’s open with a pillow on him so that Tiny has as many options for sleeping surfaces as possible. (yes, he runs the show. No, I am not ashamed of this).

On the wall, you’ll see a gaming poster gifted me by some Canadian fellow. (/wink). Also a Wonder Woman poster, because she is amazing and the new movie was well worth watching. Seriously. There’s unapologetic thigh jiggle. Hall-A-Freaking-Lue-Ya.

Ahem. There’s also a fan that somehow survived all of my various “I own too much stuff” purges and actually came from my trip to Japan when I was in high school.

The last pic is my plotting board — affectionately known as my “Murder Board” because the previous incarnation had red thread tying together various pushpins for plotting purposes. It looked like one of those crazy boards you see in police procedurals all the time.

I use it to do my story plotting according to the 7 Point Plot Structure, as well as keep tabs on pending questions I need to answer and various other things. Hopefully none of you can actually read those notes, because they contain spoilers for the next book I’m writing.

Also, yes, both Tiny and I use that side table to boost our way to the top bunk. Graceful swans, we are not, but it gets the job done. The handles are feathers, because I’m an adult and I can replace boring old store-bought handles if I want to. Even if that means multiple trips to a Menards because screw length matters, and when that doesn’t work, I just hold the last quarter-inch in place with bubble gum. (In the distance, I high-five MacGuyver)

I know I forgot to mention or show things. The bathroom is pretty neat, and my mouthwash is in a fancy glass jar with a cork stopper. The closet is actually HUGE — not just walk-in, but with shelves all along the top and in the back (where I’m keeping extra blankets and bedding for the most part).

I really, really like it, and I hope you do, too! Feel free to ask any questions!