I realized that I posted over on Facebook about my new kittencat, but never actually posted here!

I know, I am just as aghast as you. 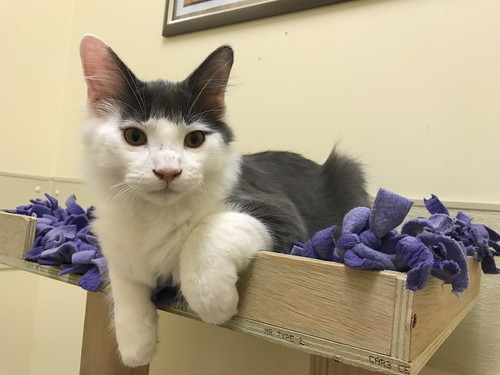 After Tiny’s stress-based health scare (he stopped eating, which is pretty alarming if you know how food-obsessed he is) I realized that he was lonely.

Like … waiting for me asleep against the front door when I got home from work lonely.

So I set out to find him a companion quickfast. I didn’t want to wait for another Siberian even though my allergies would have preferred it … I wanted to get him a friend in weeks, not months.

So I looked around and found Angel’s Wish, a cat rescue organization in the area with a LOT of cats. Once my application was approved, my mom came down and we evaluated dozens of felines.

My vet recommended a kitten to make the transition easier, so I tried to only look at fluffbeans under 2 years old.

Tiny is NOT a small cat, and I remember his playstyle being more of a full-body suplex, pounce/tackle/bunnykick sort of thing … so most of the really tiny kittens were also rejected. 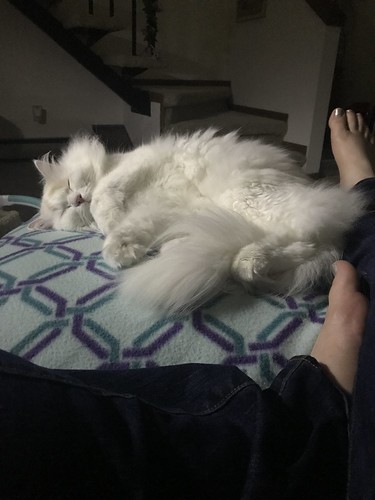 I needed someone who was big enough to handle Tiny and calm enough to transition nicely into the house. Also, my apartment only allows 2 cats, so I couldn’t take any bonded pairs.

This still left me with dozens of options. There was a gorgeous (bonded) seal-point siamese. There was a timid silver-black girl who is going to be flipping GORGEOUS when she grows up and her medium-haired coat leaves her with black mittens and a snowy body. There was a too-pushy calico. Two orange tabbies who were adopted before I could look at them. One orange tabby that I specifically asked to see but whose foster parent didn’t bring him in that day.

Just as we turned to leave, another foster arrived with a whole passel of kittencats, and there he was. Twice as big as the other litter he was housed with, but the same age. Cool as a cucumber with the silliest gray “hat” I’ve ever seen and big brown eyes. 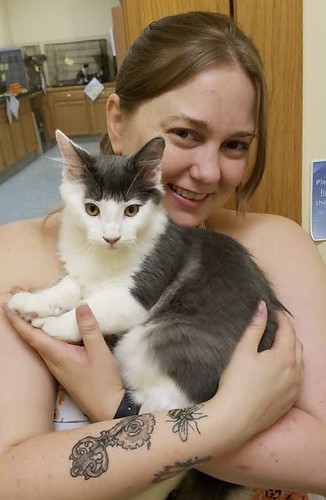 His foster mom wanted to keep him (and I still send her emails with updates). He was the last surviving barn kitten — they think a raccoon got not only his siblings but also his mother.

He was born in May, which makes him the biggest dingdang kitten I have ever seen. He came with the name Moose and there wasn’t a chance in the world that I was going to change it. 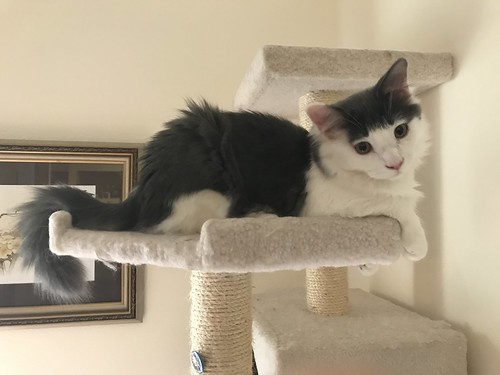 He transitioned into the house in less than 24 hours, despite Tiny hissing and growling at the start. 1 day, you guys. That’s so short that it surpasses “unbelievable” and saunters right into “magical” territory. 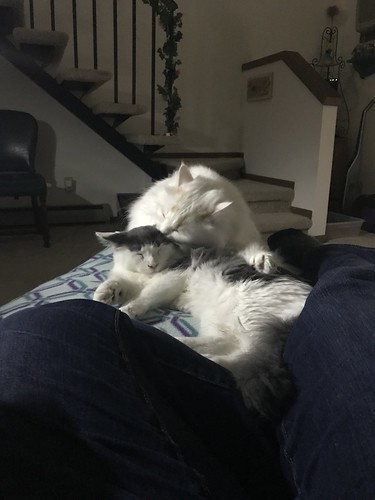 He snuggles under the blanket with me. He goads Tiny into play. He amuses HIMSELF with toys for hours. 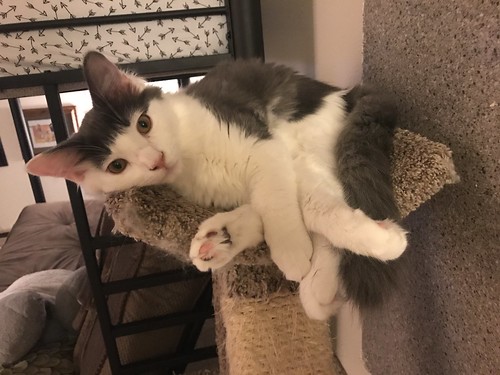 He’s still a little hand shy, but getting used to being petted. His ears and toe beans are multicolored. 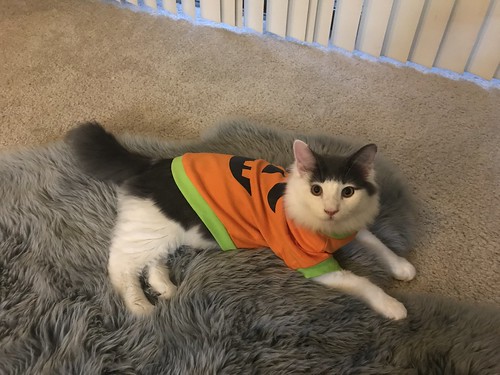